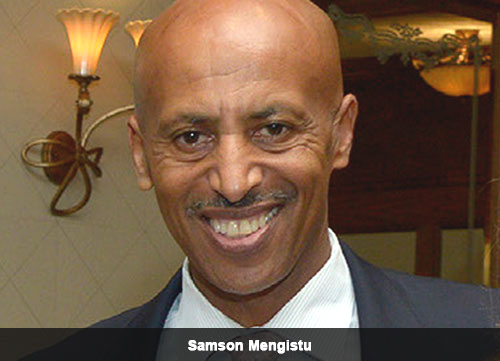 Samson Mengistu is the Deputy Executive Director for Administration at Los Angeles World Airports (LAWA). As a senior executive, Samson oversees the functions of the Comptroller, Board of Airport Commissioners (BOAC) Office, Human Resources, Risk Management and Contract Services. Capital’s Groum Abate spoke to Samson to get a glimpse of the workings of the LAWA and the new Ethiopian Airlines flight to Los Angeles. Excerpts:

Capital: Why are you here in Ethiopia?
Samson Mengistu: I’m here because Ethiopian Airlines launched a new service between Los Angeles and Addis Ababa, and as part of my responsibility–I’m the Deputy Director for the Los Angeles Airport–one of my responsibilities is air service development. So I have been talking to Ethiopian Airlines about starting a new service. And now that they have started that service, we feel like we need to promote the service so that the flight is successful.

Capital: Do you believe the flight will be successful?
Samson: Yes, we believe there is a strong market, because of a lot of market research they have done, which match our own market intelligence, not only because of the ties between Los Angeles and Addis Ababa, but also because they make a stop in Dublin. They also have what they call fifth freedom rights, which means they can pick up passengers from Dublin. We think they will be very successful.

Capital: How will the new service benefit Ethiopia?
Samson: I think the effect is on both tourism and trade. We expect that people in Los Angeles will start importing goods and services from Ethiopia, while some tourists will start travelling to Ethiopia. In that regard, I think it will be very helpful economically, to Ethiopia as well as Los Angeles.

Capital: American airports charge unreasonably high prices for planes landing at their airports. What can you say about that, especially as in how it relates to Ethiopian Airlines?
Samson: In Los Angeles, we have a unified charge, meaning all airlines pay the same fee both for landing and using the terminal for ticket counter, offices and such. So, even if it is high, compared to most airports, Los Angles is not considered very high today; there are many other airports that charge much more. What is important is that it is equal for everyone, so Ethiopian Airlines is not disadvantaged. It is left up to the airlines to compete with other operating costs, so they have to be efficient, which we think they are. That way, the high price could be offset by high revenue.

Capital: Is there a difference in terms of pricing when airplanes use the extreme end of the terminal as opposed to the middle of the terminal?
Samson: No, like I said, the landing fee is uniform all around the airport and also the terminal fee. In the last three years, we have put a program where there is a unified charge where everybody is charged the same. There are some other costs the airlines themselves contract out. Depending on who they contract it out to, that cost can vary from terminal to terminal, from contract to contract, and from airline to airline.

Capital: All those costs are covered through airplane ticket sales. How does that affect airfare?
Samson: The airport costs, landing and terminal fees, to an airline are relatively small. The high cost for operating an airline is fuel and then personnel cost. So compared to those, airport costs like landing fees and terminal charges are relatively low. To give you an idea of the landing fee at LAX, it is based on landed weight, so the bigger the aircraft, the higher the fee. We charge USD 4 per 454 kilograms of landed weight. An aircraft may weigh as much 270,000 or 300,000 kilograms. That is what they are charged. When you divide that among the 200 or 300 passengers, it is not that expensive.

Capital: Your airport is privately owned, correct?
Samson: The airport is city-owned but it’s independently run; we are what we call a proprietary department, with seven Board of Airport Commissioners appointed by the mayor. We have to spend the money we generate at the airport on the airport itself. In other words, the city cannot take the revenue out to employ police or to fix the streets. By federal law, all airports in the US have to reinvest the money they generate back in the airport.

Capital: Do you provide support to the Ethiopian Civil Aviation?
Samson: No, we do not and we cannot. With Ethiopian Airlines, what we have told them is that we will help them promote the service so that they become successful and this (the visit) is part of it. When they arrived the first day in Los Angeles, there was a big gate event consisting of a big introductory dinner, which was covered primarily by Ethiopian airlines. But we were there to help them, assist them in the budget and assist them in getting the right people.

Capital: In general, how many planes can the airport accommodate?
Samson: Everyday, 1,600 airplanes take off and land at LAX. Last year, we had 70.7 million passengers, making it the second busiest airport in the US, and the fifth largest in the world.

Capital: Is there anything else you would like to add?
Samson: The one thing I will tell you is that, at LAX there are  159 non-stop services from LA served by 60 airlines. When Ethiopian Airlines arrived, it became the only African carrier, not only in Los Angeles, but also in the whole West Coast.  In that regard, everybody in Ethiopia should be proud.

Samson Mengistu is the Deputy Executive Director for Administration at Los Angeles World Airports (LAWA). In this position he oversees the functions of the Comptroller, Board of Airport Commissioners (BOAC) Office, Human Resources, Risk Management and Contract Services.

Professional Experience
Mengistu joined the City in 1989 after working extensively in the property management field. In an early assignment, he established and managed LAWA’s widely acclaimed Soundproofing Program.

Mengistu was appointed Deputy Executive Director of Board Relations and Special Programs in 2003, serving as BOAC liaison. In addition, he was in charge of LAWA’s $500 million Property Acquisition Program and the Risk Management and Procurement divisions. As Chief Assistant to the Executive Director from 1999 to 2003, he assisted in managing and directing a staff of approximately 2,500 professional, technical, and support personnel.

Education
Mengistu earned a Bachelor of Arts degree in Economics and a Master of Science in Public Administration from California State University, Los Angeles.

Affiliations
Mengistu is a member of the Board of Directors of the Los Angeles Area Chamber of Commerce, the American Association of Airport Executives, the Southern California Leadership Network and the Governing Board of Open Charter School.

Personal
Mengistu lives in the Los Angeles community of Westchester with his wife and two daughters.