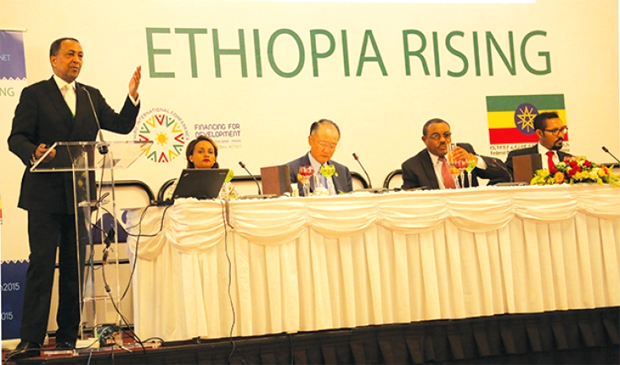 The High Level event was one of the most important events held on the sidelines of the Third International Conference on Financing for Development and chaired by Ethiopian Prime Minister Hailemariam Desalegn. The High Level event was also attended by Dr. Jim Yong Kim, President of the World Bank. Private sector views from Mr. Zemedeneh Negatu, Ernst and Young Managing Partner for Ethiopia and Ms. Bethelehem Tilahun, Founder and Executive Director of Sole Rebels were presented on the business opportunities and environments in Ethiopia.

Prime Minister Hailemariam Desalegn, opening the event, said that the government strongly believes that the private sector is a fundamental partner in the post-2015 development agenda. He calls for the business community, both national and international, to partner and play a central role in delivering the Sustainable Development Goals and in Ethiopia’s vision of becoming a middle-income economy in about a decade’s time. He said achieving and sustaining economic development will fundamentally depend on the extent to which “we can effectively mobilize both domestic and external private sector investments.”

The Prime Minister who contrasts Ethiopia’s past history of war and instability with its current growth trajectory said “Ethiopia fits naturally into the Africa Rising narrative.” He said Ethiopia’s growth has been inclusive and enabled it to make significant progress in human development.

The Prime Minister reiterated the Government’s determination to do more in the years ahead as “Ethiopia has crafted a long-term vision of ensuring Ethiopian Renaissance, and a medium term vision of becoming a Carbon Neutral Middle-Income Manufacturing Hub by 2025.” Hence, he said, priority was given in the Second Growth and Transformation Plan to accelerate the process of industrialization and structural transformation, by focusing in particular on job creating manufacturing industries.

President of the World Bank, Dr. Jim Yong Kim, appreciating Ethiopia’s commitment for Climate action, said it was leading the world for low-carbon and equitable growth. The President said Ethiopia’s Climate- Resilient Green Economy Strategy is a real demonstration of its commitment and expressed his confidence that it continues its leadership in climate negotiations.

On the development achievements of Ethiopia, Dr. Jim Yong Kim noted that Ethiopia has achieved most of the Millennium Development Goals set by the UN fifteen years ago. He commended these achievements saying: with the poverty rate in the country, no one has predicted 15 years ago that Ethiopia would achieve the MDGs. “It is an enormous achievement,” he said.

Mr. Zemedeneh Negatu, Ernst and Young Managing Partner for Ethiopia highlighted the ten most important reasons to invest in Ethiopia: its fastest economy, its demographic advantage, its rapid urbanization, its business environment to be manufacturing hub of Africa, its infrastructure development, its huge untapped resources, its agriculture, its tourism, its operating environment and its strategic location.

Ms. Bethelehem Tilahun, Founder and Executive Director of Sole Rebels presented her experience of building climate friendly industry based on local resources and calls for foreign investors to use the opportunities in Ethiopia.