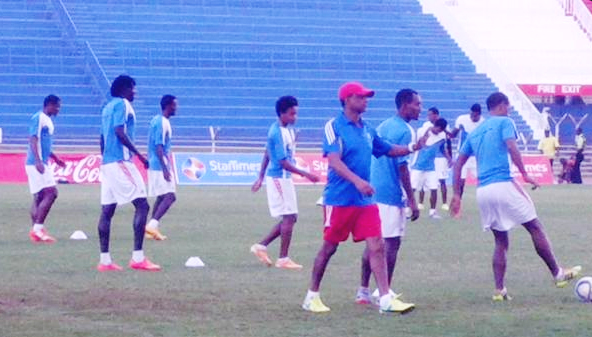 Ethiopia Walia Ibex head Coach Yohanes Sahle has cautioned his players against being over confident when they face Stars in the return leg of their Chan 2016 qualifier in Nairobi on Saturday.

Speaking at Nyayo National Stadium on Thursday evening, Sahle however promised fireworks adding that their target is to win or a draw at worst.

He disclosed that he will make minimal changes from the squad that beat Harambee Stars 2-0 in the first leg.

The coach further expressed confidence the team has a bright future going by their first leg performance.

“I will make very minimal changes because I’m satisfied with the squad that played in the first leg in Ethiopia. My boys are in great form after our Government back home rewarded them after beating the Kenyans.We hope they will maintain the same winning mentality,” said Sahle.

“We have been camping at Hawassa town where the climate is just similar to here in Nairobi. We are hopeful to go through simply because the first leg win is an advantage to us but we have to be very careful.

“I know the Kenyans will come fully prepared to hit us but we are prepare for them.”

The bonus given by the Ethiopian Football Federation (EFF) has given the players an inspiration to perform well on Saturday.”

The coach however declined to name his probable line-up and the players who are in Nairobi but said, “The boys are here with a mission to win”.

The team had earlier beat Lesotho 2-1 in an Afcon match before facing the Kenyans whom they demolished 2-0 in a match watched by over 80,000 fans in Barhir Dar .