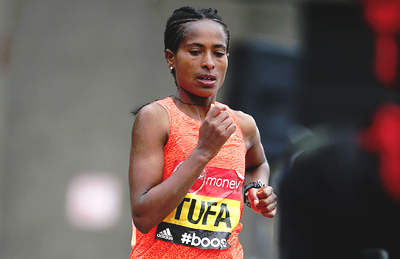 In her first race on British soil, 28-year-old Ethiopian Tufa was a surprise winner of this year’s London Marathon, beating a high-quality field in 2:23:22. It was her third marathon victory within 12 months, having won in Ottawa and Shanghai last year, running a PB of 2:21:52 in the latter.

Her half-marathon PB of 1:10:03 dates back to 2008, but this year’s Great North Run will be her first race over the 13.1-mile distance since emerging as a top-level marathon runner.

“It’s something that’s given me a lot of confidence,” said Steel. “Not many British athletes can say they can mix it with the top Kenyans and Ethiopians on the road and it’s not something I ever thought I’d see myself doing.

“There are the Kenyans and Ethiopians, and then there’s me. It’s a good position to be in,” added Steel, who is contemplating making her marathon debut later this year.

“Everyone says the marathon is what I should be aiming at but I am still wary,” she said. “The marathon is a long way. It took me a few years to master the half marathon and the full marathon is a different animal altogether.”