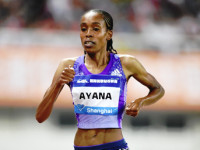 The Shanghai IAAF Diamond League meeting on Sunday (17) was supposed to be about Bogdan Bondarenko and Mutaz Essa Barshim and their pursuit of the world record in the men’s high jump.

If that was the script, nobody told Almaz Ayana (Ethiopia), who stole the show with a runaway victory in the women’s 5000m, running the third-fastest time ever in the process.

It was a personal best, a meeting record, an Asian all-comers’ record and an IAAF Diamond League record. Only world record-holder Tirunesh Dibaba (14:11.15) and Meseret Defar (14:12.88) have ever gone faster and Ayana might have topped those times too had she had more competition over the last half of the race.

It would be stretching credulity to call the 23-year-old Ayana an unknown. She took the bronze medal at the 2013 IAAF World Championships and last year won the IAAF Continental Cup in Marrakech. She has form.

Two years ago, Ayana clung resolutely to Dibaba’s heels as her more illustrious countrywoman ran 14:23.68 at the Paris IAAF Diamond League meeting. Ayana’s reward then was second place in 14:25.84, which remained her personal best coming into Shanghai.