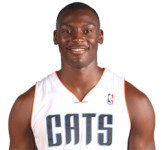 Bismack Biyombo might not have had the season he wanted with the Charlotte Hornets as they fell short of a playoff place in the Eastern conference, but he promises they’ll be back with a bang.

The Congolese centre, born in Lubumbashi in the Democratic Republic of Congo, played 64 games this regular season — starting 21. His presence on the defensive end has been a standout feature for his team. He came up with 1.5 blocks per contest and he pulled down on average 6.4 boards a game.

He has shown that when his team need him he never hesitates to answer the call. At 22 years old he’s still young and can still grow into a dominant force.

He played in Spain before joining the NBA. He was drafted seventh in the first round in the 2011 NBA draft.

Injuries and a loss of form have hampered his development a little, but he has the potential to light up the league if he can add a scoring element to his game.

He, like many other Africans, will be excited about the NBA finally coming to play a game on the African continent. The eyes of the world will be on South Africa on the 1st of August when Team Africa take on  in a first of its kind exhibition game.

Biyombo is hopeful that the right preparations in the close season will see him move to the next level. He knows that it’s a privilege to play in the NBA and he wants to give back to the Hornets fans.