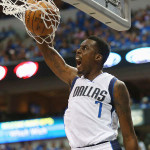 Nigerian-American Al-Farouq Aminu has played one of the best playoff games of his NBA career on Sunday to help the Dallas Mavericks beat the Houston Rockets.

More than contributing for a much-needed win, which allowed Dallas to cut the first-round series to 3-1, Aminu, who started in a playoff game for the first time, was tasked to defend MVP candidate James Harden, and he did really well.

Both Aminu and JJ Barea, who replaced injured Chandler Parsons and Rajon Rondo, were the unlikely heroes of the night.

Aminu made significant impact on the game, finishing with 16 points, 12 rebounds and a block for his first career post-season double-double.

But more importantly for Aminu, who is expected to represent Nigeria at AfroBasket 2015 in Tunisia from 19 to 30 August, he played great defence on Harden, who scored 15 of his 24 points from the field, and according to ESPN Stats & Information, Harden was only 5-of-11 for 11 points with Aminu guarding him.

Aminu is known for his ability to guard practically any position and might be an option for coach Rick Carlisle for Game 5 on Wednesday in Houston.

“I always try to provide energy and defence. That’s what my staple is on this team. I just try to do my job,” Aminu said after the game.

And Carlisle: “He’s one of our most relentless workers. He’s earned this opportunity. He impacted the game in a lot of ways tonight.”

For the team All-Star Dirk Nowitzki, Barea and Farouq were phenomenal. |It was kind of like a next-man-up mentality. Those guys stepped in and both were great.”