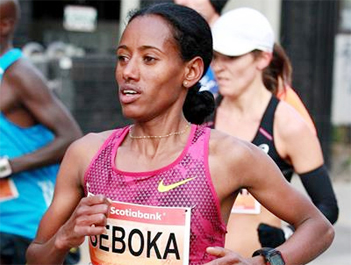 Paris, France – Mulu Seboka of Ethiopia is one of the favourites for the women’s race at the Schneider Electric Paris Marathon, which will be held here this Sunday.

The 31-year-old was victorious at the 2014 Dubai Marathon and finished sixth in the same event this year, but smashed her PB with 2:21:56.

She will need to improve on that further if she wishes to break the course record of 2:21:06, set by Feyse Tadesse in 2013.

Amane Gobena is another strong Ethiopian in the field. Winner of the LA and Istanbul marathons last year, Gobena has a personal best of 2:23:50 and will be looking to better her seventh-place finish from Paris in 2013.

Five of the top six athletes are Ethiopian; Kenya’s Emily Ngetich being the exception. The 31-year-old set a PB of 2:25:14 in her most recent marathon and last month smashed her half-marathon PB with 1:09:13.

Martha Komu is the fastest French athlete in the field with her 2:25:33 PB, set when winning in Paris in 2008. But the last time she ran faster than 2:30 was when finishing fifth at the 2008 Beijing Olympics.

The 54,000 expected participants will run past famous Paris monuments such as the Eiffel Tower, the Arc de Triomphe, the Place de la Bastille and Notre-Dame Cathedral. The race stretches beyond the centre of Paris, into areas as far as Bois de Vincennes and Bois de Boulogne.