If Girmay Birhanu and Meselech Melkamu live up to their status as favourites at the Daegu International Marathon on Sunday (5), it will be the third time that Ethiopians have won both races at the IAAF Silver Label Road Race.

Last year, at the sixth edition of the marathon, Ethiopian duo Yemane Tsegay and Mulu Seboka won both races, Tsegay setting a course record of 2:06:51.

Although neither of the 2014 champions will defend their titles in the Korean city, Birhanu and Melkamu will hope to uphold their country’s honour on Sunday when heavy rain is forecast during the race.

Birhanu is the fastest in the men’s field. He set his PB of 2:05:49 when finishing third in Dubai last year. In 2013 he finished second in Amsterdam, Rome and Prague, running faster than 2:10 on each occasion.

More recently, he won the Beijing Marathon last October and finished eighth in Dubai in January with a season’s best of 2:08:56. 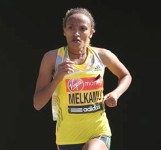 Since running 2:21:01 on her debut at the distance to win in Frankfurt three years ago, Meselech Melkamu is yet to win another race over the classic distance.

Melkamu, who last year finished second in Dubai and fifth in Boston, has competed in Daegu before, albeit on the track; she finished fifth in the 10,000m at the 2011 World Championships.