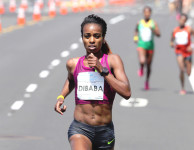 Carlsbad, CA – Two-time world indoor champion Genzebe Dibaba of Ethiopia narrowly missed out on breaking the world best at the Carlsbad 5000, but her winning time of 14:48 was the second-fastest ever recorded for 5km on the roads.

The 24-year-old owns the fastest times in history across four distances indoors, and had been hoping to add another mark to her growing collection. Just like three of her indoor record-breaking performances, she was targeting a time that had been set by Meseret Defar. The two-time Olympic champion ran 14:46 on this course in 2006.

But a 4:50 opening mile – some seven seconds slower than Defar managed nine years ago – meant that Dibaba left herself with too much to do. She was part of a 10-woman lead group at that point, but she upped the pace and was left with just her Ethiopian compatriots Gelete Burka and Wude Ayalew for company.

Having covered the second mile in 4:42, Dibaba was now just three seconds adrift of Defar’s world best pace. Soon after, Burka and Ayalew dropped behind and Dibaba – just like in many of her record attempts – was out in front.

Racing on a different, and slightly more challenging, route to the one Defar contested in 2006, Dibaba rallied hard in the closing stages but was still a few metres shy of the finish-line as she saw Defar’s world record figures tick by on the clock.

Nevertheless, she was rewarded with a winning time of 14:48, the fastest 5km debut in history in just her second ever race on the roads. She also moved ahead of her older sister on the all-time list; Tirunesh Dibaba, a two-time winner in Carlsbad, had a best of 14:51 from 2005.

Burka, the 2006 world cross-country champion and 2008 world indoor 1500m champion, finished second in 15:13, taking 13 seconds off the PB she set when winning in Carlsbad two years ago.

Ayalew, the 2009 world 10,000m bronze medallist, also set a PB, clocking 15:18 in third place. It was just the second time in the 30-year history of the Carlsbad 5000 that Ethiopians had swept the podium positions in the women’s race.