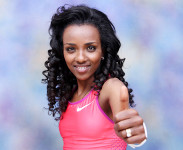 Three time Olympic champion Tirunesh Dibaba had decided to skip the entire 2015 season on maternity leave, and according to Admas radio sources, she gave birth to Nathan Sileshi on Thursday night, at the Northside Hospital in Atlanta Georgia. The seven pound baby and new mother are doing well and are expected to leave the hospital this weekend. Tirunesh’s husband, two time Olympic silver medalist Sileshi Sihine is with them as well.

Championships. Since then the duo have combined for seven Olympic medals, with Tirunesh racking in three gold medals at Beijing 2008 and London 2012. In what was obviously a match made in heaven, Sileshi and Tirunesh married in 2008, with the marriage ceremony televised nation wide.

Tirunesh remains a world beater and one of the safest bets for a medal at the Rio De Janeiro games. Sileshi who was at his peak one of the best athletes in the world, has seen his career blighted by long term injury and despite never officially announcing his retirement from athletics, his last major international appearance was at the 2011 IAAF World Championships in Daegu, South Korea, where he finished eighth in the men’s 10,000 meters.

A joint statement from the couple is expected in the coming days.