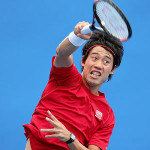 The top-seeded Japanese captured his eighth ATP crown, and his first since he won in Tokyo in October.

That was one of two titles Nishikori captured late last year after a breakthrough run to the final of the US Open.

This year, the world No 5 hadn’t made it to a final until this week, but a return to Memphis proved the tonic he needed.

“It feels great,” said Nishikori, who became the first man to win three straight titles at Memphis since the tournament began in 1975. “I think I’m going to move here soon.”

His win over the second-seeded Anderson, in 75 minutes, was his most complete performance of the week, and his first match of the tournament in which he captured the opening set.

Nishikori took charge in the second with a break for a 3-2 lead but the drama wasn’t done.

After the South African pushed a backhand long, Nishikori sealed the win on his fourth opportunity, when Anderson went wide with a forehand.

“I played one of the best matches I played here,” Nishikori said. “I thought it was a great match, so I’m really happy to win today.”

Anderson, the world number 15 who received a wild card into the tournament, fired 12 aces, but was broken three times as he endured his sixth straight ATP finals defeat.

His only titles came at the 2011 South African Open and in 2012 at Delray Beach, Florida, where he now resides.