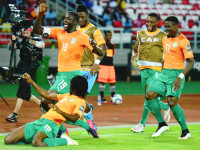 The Ivorians have reached the final of an AFCON tournament yet again, for the third time in the last six editions. A 3-1 defeat of Congo DR saw the Leopards shot back to earth after what has been a fantastic tournament for Florent Ibenge’s overachievers.

The Elephants played attacking football for most of the first half, although it was Congo DR’s Jeremy Bokila who tested Ivorian goalkeeper Sylvain Gbohouo early on.

But in the 20th minute, Yaya Toure, who has had a quiet tournament by his astronomical standards, finally got his name on the AFCON score sheet with an absolute blast out of nowhere. Wilfried Bony looked like he had given u possession when he slipped, bu the ball rolled away and into the path of the incoming freight train that is the Manchester City midfield general. Yaya’s strike wasn’t the most precise, but the power drilled into the effort was as such that Robert Kidiaba could only flap his arms wildly at the ball. First blood Cote d’Ivoire.

But minutes later, Congo were level again. Eric Bailly’s lack of experience showed when he failed to sufficiently move his arm out of play and it made contact with the ball in the box. The penalty was given. Up stepped Dieumerci Mbokani, and he got this third of the tournament to put him tied for the golden boot.

But the Ivorians were just too powerful to be kept quiet.