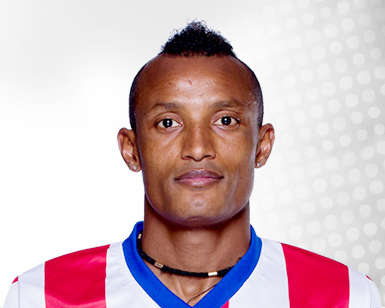 Former Ethiopian international Fikru Teferra Lemessa has made a five man shortlist for the 2014 Indian League’s Most Exciting Player of the Year award. The nomination comes after a solid debut season in Indian football for the three time Ethiopian Premier League winner. The Atletico de Kolkata striker has been a key part of the team’s drive to win the league and qualify for the four team post league playoff round. Although they just fell short of the league, Fikru’s goals were a reason for the team remaining in the mix for the entire campaign.

Fikru has left his mark on the league with his stunning goals, including the first goal in the history of the Indian Super League, as well as his acrobatic goal celebrations which have been a delight to watch for Atletico de Kolkata fans. Besides that, his no nonsense personality and unpredictable temper has had him clash on field, most famously when he headbutted French defender Gregory Arnolin of FC Goa. That act resulted in a two game ban and a 500,000 rupee (about 163,000 Ethiopian birr) fine.

The voting is done online. To cast your vote for Fikru Teferra, click here.