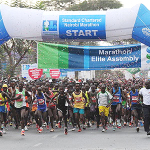 The 12th running of the annual Standard Chartered Nairobi Marathon on October 28 netted over $310 000 for charity organisers have declared.

Little-known Peter Kosgei clocked 2:12:24 for the men’s 42km title with the corresponding women’s race won by Edith Irungu in 2:32:02 to sustain the proud tradition of the blue riband Kenyan event of unearthing breakout talent since it has had only one repeat victor since it was established in 2003.

The spike in charity money from corporate and individual donors came against a backdrop of the first drop in participant numbers since inception with organisers declaring 18,500 took part in 2014 as opposed to 21,000 last year, attracting nationalities from 67 countries.

All funds will be donated to the ‘Seeing is Believing’ initiative, the title-sponsoring ban’s Corporate Social Responsibility flagship that focuses on eradication of preventable blindness in children.

“It was encouraging to note in the spirit of the event’s tradition, new winners were born. This reaffirms the billing of the Stanchart Nairobi Marathon as a platform for unveiling new talent,” Lamin Manjang CEO Standard Chartered Bank said at an award gala on Wednesday night in Nairobi.

“Being the only IAAF accredited event in the region, we shall endeavour to raise the profile of the marathon and make it more competitive. We are confident that elite foreign athletes will soon be joining the fray to challenge the dominance by Kenyans,” he added.

Part of the funds will be used to sponsor cataract, glaucoma and trauma related surgeries for needy children under the age of 15 in various hospitals across the country.