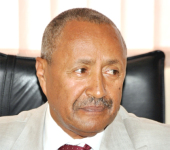 Captian Mulat is a seasoned pilot who served Ethiopian Airlines for 39 years and has accumulated 27,000 flight hours under his belt. While working for the national flag carrier he commanded aircraft from the old DC3 to the state-of-the-art jetliner, Dreamliner.

Mulatu founded an investment company called M.T.D.N and built Dreamliner Hotel in Addis Ababa near Meskel Flower eight years ago. He started talking about the new business venture with his former colleagues a year ago. He retired from Ethiopian Airlines last August.

M.T.D.N owns the new private airline, East African Aviation, and the pilot training school. Captain Lemma Tekalign, general manager of East African Aviation, told The Reporter that the company was undertaking a feasibility study and working on paperwork for the last one year. Lemma said that the company submitted application to the Ethiopian Civil Aviation Authority (ECAA). “They evaluated our application swiftly and approved the documents. To give us the Air Operator Certificate (AOC) and license for the pilot training school they are waiting for the arrival of the aircraft that we bought,” Captain Lemma said.