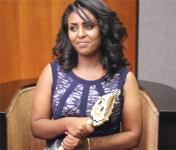 By Meheret Selassie Mekonnen, The Reporter

Held for the ninth time, the festival kick-started on November 17.

This year the competition consisted of 10 categories- best Feature Film, Cinematography, Director, Screenplay, Actor, Actress, Supporting Actor, Supporting Actress, Promising Child and Audience Choice. The closing ceremony at Hilton Addis was a glamorous night for most filmmakers. Above all it can be said it was the best night for the Rebuni crew who took six of the awards.

Rebuni, released last year, won Best Feature Film and Best Audience Choice awards. The writer and director of the film, Kidist Yilma, won Best Director and Screenplay. The lead actress of the film, Ruta Mengisteab, was awarded Best Female Actress of the year. This year the festival mainly focused on children. For this reason there was a Best Promising Child category. The category brought an additional trophy for Rebuni’s child actor – Yeabsira Tekilu.

Called to the stage numerous times Kidist could not say much except “thank you God” in a quivering voice. “For me and the rest of the crew, this award is a responsibility, compelling us to do much more” Kidist told The Reporter. She said the award gave them energy and it feels great to be appreciated and recognized for something they had worked on tirelessly.