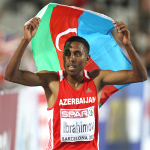 The trend of Ethiopian runners switching allegiances and participating in international athletics competitions under the banners of other nations is a growing one, which owes it’s rise to many underlying issues that the sport’s governing body has yet to show any desire to tackle. Many of the athletes personally make the switch motivated by financial desire, or a lack of opportunities in a congested and fiercely competitive national team. But there are those, who are more than financially independent and capable of making the Ethiopian national team cut. The likes of Abeba Aregawi, a world championship gold medal winner for Sweden, have left us scratching our heads and looking suspiciously at the actions of our own federation, whatever they may specifically be, which made the former Ethiopian 800 m national champion turn to Sweden, a country she first visited in 2009.

We promised to bring you the story of one such athlete, namely Azerbaijan’s Hayle Ibrahimov. Hayle’s story is quite different than what you would expect. We at eHaHu.com were quite alarmed with the story the Mekelle born, Azerbaijani naturalized athlete had in store for us. Unlike many other athletes who found relative prosperity competing for their new countries, Hayle is in a never ending cycle of extortion by Azerbaijan’s Athletics Federation, as well as his Azerbaijani athletics club, Idman Athletics.

The story of Hayle begins in Mekelle. He was born Hayle Desta Hagos, on the 18th of January 1990.