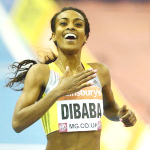 With elder sister, three-time Olympic and five-time world champion, Tirunesh taking a maternity break, Genzebe Dibaba, is purpose set to step in and fill the void by dominating 5000m racing next season.

The 23 year-old took a giant step in following into her famed sister’s footsteps when she made the final shortlist for the 2014 IAAF Women Athlete of the Year Award, won by Tirunesh, 30, thrice at the back of a solid campaign.

Genzebe set the world alight during the 2014 indoor season when she smashed the 1500m and 3000m world indoor records and set a world best at two miles, all within 15 days, before going on to claim the world indoor 3000m title in the Polish city of Sopot.

She added a victory over 3000m at the IAAF Continental Cup in Marrakech in September and is now preparing for 2015 when she aims to break the world indoor 5000m record at the XL Galan in Stockholm and take the gold at the same distance at next summer’s IAAF World Championships in Beijing.

“This year was the best year for me,” said Dibaba, who is short-listed for the award along with shot putter Valerie Adams and sprinter Dafne Schippers.

“The indoor season was the best of my career so far when I broke three world records.

“Now I have two goals for the 2015 indoor season. I am preparing myself to break the 5000m world indoor record in Stockholm and then run the mile in Birmingham.

“But my main goal this year is not more records, but only to win the gold medal at the World Championships where I will run 5000m.”

Genzebe is the latest member of the Dibaba family dynasty to reach the pinnacle of world athletics, following her older sisters Ejegayehu and Tirunesh, while the next in line could be Anna, her 18-year-old younger sister who has just started training.

“It is difficult to compare myself with Tirunesh. She’s so strong and has won so many championships,” she said of her senior who announced she was expecting her first child with spouse and two-time Olympics silver medallist, Sileshi Sihine, last month.

Like Tirunesh before her, Genzebe’s achievements – and glamorous looks – mean she is now a celebrity in her home country of Ethiopia where she has appeared on TV chat shows.

The new fame, she admitted, is something she is growing to like.

“Yes, it’s good,” she said. “We don’t walk outside much at home; we go to training by car so we don’t see people too often; but sometimes, when we go out, people ask us to sign things and for photographs. It’s a good feeling.”