Addis Ababa, Ethiopia – When Scottish explorer James Bruce published a five-volume work in 1790 about his search in Ethiopia for the source of the Nile, European readers dismissed his account of ancient churches and castles – surely no such thing existed in the heart of Africa.

Fast forward to 2014 and Solomon Tadesse sometimes feels he faces similar preconceptions as he seeks to attract tourists three decades after images of famine and communist purges filled TV screens and shaped the world’s view for a generation.

Yet Solomon’s Ethiopian Tourism Organisation is making headway in the battle to change attitudes. Visitor numbers have risen 12 percent a year in the past decade to reach 600 000 in 2014. His target next year is one million.

“That aspect has definitely diminished the old clichés, the old paradigm, the old mentality of Ethiopia being a country of famine and war. Rather now (it is) with potential for economic growth,” said Solomon, chief executive of the organisation, a joint initiative between the state and private enterprise.

In the capital Addis Ababa, the transformation from the starvation years and the Red Terror purges of the 1970s and 1980s is plain to see. Construction is booming and a metro opens next year, cutting through the sprawling city – the only such network in sub-Saharan Africa.

Ethiopia’s goal is to lift tourist revenues to $3 billion (about R33 billion) next year from $2 billion last year and, if it achieves that, it will start challenging the dominance of regional rivals on Africa’s eastern seaboard, such as Kenya and Tanzania. But instead of beach holidays and safaris, land-locked Ethiopia is promoting its imperial past – the below ground-level 13th-century Churches of Lalibela, hewn from solid rock, and the hill Castles of Gondar – as well as its mountainous and majestic topography. 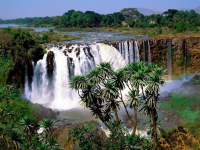 And, while Kenya’s tourism industry has been hard hit by a series of attacks by Islamist militants over the past year, Ethiopia, which offers little room for political dissent and keeps a tight rein on security, has largely avoided such events.

Tanzania, meanwhile, drew more than one million visitors for the first time last year and is targeting two million by 2017, although the numbers still pale when compared with other African tourist hubs, such as Egypt, which attracted 9.5 million visitors, and Morocco, which hosted 10 million tourists.

“What Ethiopia offers to tourists, different from Kenya and Tanzania, is history and culture,” Tony Hickey, an Irish tour operator who first came in 1973, said.

He reels off names of the rich and famous for whom he has arranged Ethiopia tours, such as US film director Oliver Stone and designers Calvin Klein and Donna Karan, visits which he believes are the result of changing perceptions of Ethiopia.

But challenges remain if Ethiopia is to fulfil its tourism goals. Just three major international chains run hotels in Addis Ababa and operators complain that bureaucracy hinders plans for new hotels and trained service workers are in short supply.

“Hotel rooms, both in terms of quantity and quality, I think this is the single largest critical problem to boosting tourism numbers in Ethiopia,” said Tewolde Gebremariam, chief executive of Ethiopian Airlines.

“If we are able to convince these people to come to Ethiopia, visit for a couple of days and then continue with their journey, that would mean a lot,” said Gebremariam.

But, for now, more transit visitors would add to the hotel room squeeze. The airline already needs 300 rooms a day just to meet demand for passengers with long connecting flights. “There aren’t the hospitality training institutes you get in Kenya,” tour operator Hickey said.

“Hotel developers are not asked to provide human resource development plans when given the green light to build.” 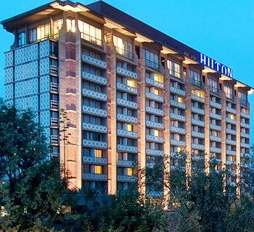 The Sheraton, Radisson Blu and Hilton are the only major brands in Addis Ababa. More international chains are building hotels, but the number of high-end rooms will still only be about 1900 by 2017 from about 900 now, in a nation of 90 million people.

Capacity constraints are evident when delegations turn up for summits at the 54-nation AU, which has its headquarters in the Ethiopian capital. High-end rooms are booked weeks in advance and lower-end hotels jack up prices.

Despite the need to expand, investors grumble that their plans to build are often hobbled. They complain of regulations that hinder speedy leasing of land and slow customs approval to import equipment.

In response to complaints, the Tourism Transformation Council, chaired by the prime minister, was set up to improve links between the government and private business in the former communist country where the state still dominates the economy.

“The contribution of tourism and the hospitality industry to the economic development of my country is vital,” Prime Minister Hailemariam Desalegn told a conference for hotel operators in September.

“When you look at Ethiopia and the economy and the development, it is being done in the right way,” he said. “This is giving us a lot of confidence in the market.”