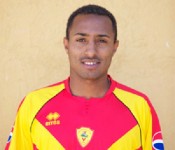 Addis Ababa, Ethiopia – Nimble, quick and blessed with off the ball movement that keeps Ethiopian Premier League defenders on pins and needles, Fitsum Gebremariam is perhaps the closest thing Ethiopia has to Filippo Inzaghi.

The Saint George striker is at the peak of his game. He had a stellar campaign last season, despite playing second fiddle to first choice striker Omod Okori. Deployed on the flanks at times, Fitsum still managed to bag in goal after goal, which led to his finishing as the league’s second highest goalscorer last season behind only Omod. This despite a mid season injury which required travelling to Florida for surgery which kept him out of action for months. He scored the title winning goal last season when Saint George travelled to Yirgalem and beat Sidama Coffee 1-0 with games to spare. In the fierce derby game against arch rivals Ethiopian Coffee, he scored both goals in Saint George’s 2-1 triumph that same season. The preseason city tournament known as the Addis Ababa City Cup or the Castel Cup saw Fitsum claim the best player and top scorer of the 2013 edition. Yes, Fitsum Gebremariam is a mesmerizing talent who has seen his stock rise in recent years.