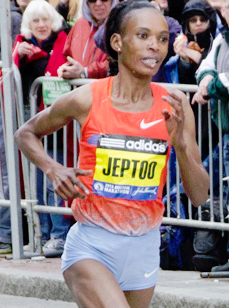 Kenyan marathon runner Rita Jeptoo has become the latest athlete from the country to fail a doping test.

The International Association of Athletics Federations (IAAF) informed Athletics Kenya of traces of a banned substance in Jeptoo’s ‘A’ sample.

An Athletics Kenya statement on the 33-year-old read: “The result of the ‘A’ sample for the athlete has indicated the presence of prohibited substances.”

Thirty-six Kenyans have been confirmed as failing tests in the past two years.

Moses Kiptanui, one of most successful runners in Kenyan history,claimed last year doping is rife among the country’s athletes.

Athletics Kenya said its medical and anti-doping commission will meet next week with Jeptoo “to establish whether she would wish to exercise her right to order for testing of the ‘B’ sample”.