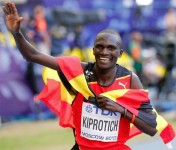 By Moses Mugalu, The Observer

Stephen Kiprotich’s hopes of winning the New York Marathon have been hampered by the current torrential rains pounding his adopted training base of Eldoret, Kenya.

The Olympic and World marathon champion has since September 19 pitched camp in Eldoret for the ideal high-altitude training environment to prepare for the meet slated for Sunday, November 2. In an interview over the weekend, Kiprotich complained that the wet weather conditions are affecting his preparations.

“There’s too much rain here and it’s hindering my practice,” Kiprotich told The Observer in an interview online.

Kiprotich, who claimed Uganda’s first Olympic gold medal in forty years with his marathon triumph at the 2012 Olympic Games in London and added a World Championship gold in 2013 in Moscow, Russia, wants to make his mark at the New York as well. In an earlier interview last month, the 25-year-old athlete stated it would be a do-or-die affair for him.

“New York will be war for me,” Kiprotich vowed ahead of the season-ending marathon event, which attract world-class athletes.

In his previous attempt at the event, Kiprotich finished in a distant 12th position last year. In a move aimed at gauging himself against the best before the event, Kiprotich has been training with top marathon athletes including compatriots Abraham and Philip Kiplimo, Kenyans Eliud Kipchoge (who won the Chicago marathon last week) and Michael Kipyego (2012 Tokyo marathon champion).