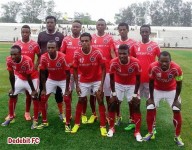 It was Weldiya Kenema which scored first thanks to a goal by Abiye Beyene just ten minutes into the game. Abiye’s removal of his jersey to celebrate his goal landed him a yellow card and this proved costly for the team as the same player was ejected later on in the game after the referee handed him a second yellow for diving in the penalty box.

The much organized Dedebit responded with four goals in the first half and added two more in the second to win by a score of 6-1.

The EEPCO- Mekelakeya encounter proved to be a very exciting match and the Defense men have to thank their goalie Jemal Tassew for the many saves he made.