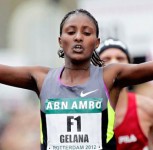 The 26-year-old Ethiopian has not yet returned to the heights she scaled two years ago when she won the 2012 Rotterdam Marathon in what remains her personal best of 2:18:58 and then took the Olympic title, but she has shown good form on the roads over shorter distances in the last seven weeks and could have Lydia Cheromei’s Yokohama course record on 2:23:07, also set in 2012, in her sights.

Gelana has never run a marathon in Japan but she is still familiar with the Japanese roads after winning the 2012 and 2013 Marugame Half Marathon.