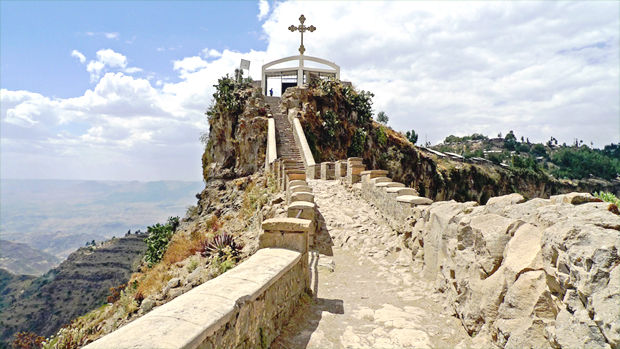 Meskel Festival, the finding of the True Cross is celebrated today in Ethiopia.

Few countries in the world possess such a wealth and variety of ancient legends and fascinating attractions as Ethiopia. Apart from its geographical and historical sites Ethiopia’s cultural and religious festivities add to the beauty of its landscape and its welcoming people. Endowed with marvelous natural and man-made attractions coupled with emerging and expanding eco-tourism, the country offers everything for travelers and adventure seekers alike.

Home to many nations and nationalities and religions, Ethiopia enjoys a multitude of colors and sights to attract a number of tourists from all over the world. The flow of tourists is increasing from year to year and becoming a preferred destination for man.

One of Ethiopia’s more popular attractions to catch the eye and interest of tourists is the yearly Meskel celebration.  The September Meskel Festival marks the finding of the True Cross on which Jesus Christ was crucified. The festival is ancient, dating back over 1,600 years. It is celebrated with yellow Meskel daisies placed on top of huge bonfires that are lit in the evening in front of the throngs of celebrants. The main Meskel celebration includes the burning of a large bonfire, the Demera, in Meskel Square in Addis Ababa. This takes place on the eve of Meskel, and is based on the belief that Empress Eleni, the mother of the first Christian Roman Emperor, Constantine the Great, had a revelation in a dream. She was told that she should make a bonfire and that the smoke would show her where the True Cross was buried. She ordered the people of Jerusalem to bring wood, and after adding frankincense, the bonfire was lit and the smoke rose high up to the sky. It then fell back to earth and returned to the ground, swirling around at the exact spot where the Cross had been buried.

During the celebration of the Finding of the True Cross, ornately robed priests carrying silver crosses dance with their followers around the fires singing and chanting and carrying flaming torches. Sunday school students dressed in traditional Ethiopian plain white clothes furnish color to the event by singing hymns and presenting colorful spiritual and artistic religious shows to the crowd.  Millions of followers of the Ethiopian Orthodox Church celebrate Meskel every year throughout the country. The festivities also mark the end of the three-month long rainy season and the return of summer to Ethiopia. No rain is expected to occur after Meskel – and indeed it is rare for this to happen. The scenery of this religious festival is a feast for the senses and for the soul.

Tourists who take part in the celebrations often find an urge to come again and again to witness the sheer pleasure and surprise that the festival offers. Many indeed return repeatedly, some for a fifth of sixth time. They fall in love with a festival which offers unique chants and different theatrical scenes. Meskel is unique also as a festival which draws people in thousands and thousands and is observed with calmness and serenity without any worries over security. It offers a colourful ceremony that people of many different confessions and faiths can attend, demonstrating their solidarity and the country’s heritage of unity in diversity – something that one finds all-too-rarely on our planet.

Meskel is designated by UNESCO as one of the World’s Cultural Heritage experiences.