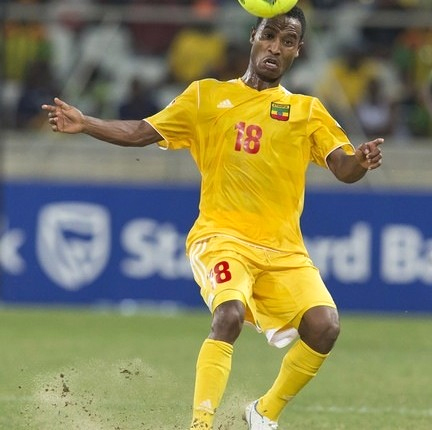 Bekele who was the man of the match against Algeria in an Africa Cup of Nations qualifier in a 1-2 loss in Addis spoke to Soka25east.com as he intimated he was excited about the move to Egypt.

“Yes I have signed a three year deal that will see me at Petrojet in Egypt and I am excited about the move after leaving El Mereikh in Sudan.I am happy with the terms and I will feel at home since my team mates Salhadin Said and Umed Ukwury are both playing in Egypt”

“I will be leaving for Egypt next week after our match against Malawi and I hope to make a mark when I move to my new team “Shemeles told Soka25east.com

Proded to explain why he left El Mereikh in Sudan,Shemeles was straight forward “you have to play for a team that you are appreciated in good and bad times.I could score many goals but when I did not I was accused and often lay shouted at and this really demoralized by spirits despite loving the club” he added

Petrojet Football Club is a football team of the Egyptian Petrol Company, PetroJet. They are based in Suez.