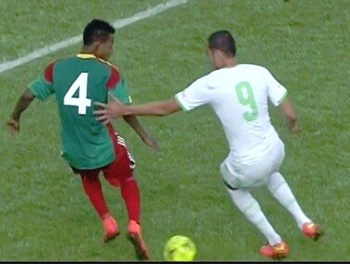 Addis Ababa, Ethiopia – The Algerian Fennecs defeated the Ethiopian Walia Ibex 2-1 in Group B match of the 2015 Africa Cup of Nations here today.

The Algerians led 1-0 at half-time thanks to a goal by El Arbi Hillel Soudani (35′), before adding a second one in the 83rd minute by Yacine Brahimi.

Saladin Said scored Ethiopia’s consolation goal in extra time (95′) thanks a penalty kick after Umed Oukri was fouled in the box.

The Walias didn’t play their usual short passing game, and there was no coordination between the midfielders and the forwards. For much of the game, they played long ball, which was advantageous to the tall Algerians.

Overall, this was a very poor display by the Walias and the score gap might have been even worse had the Fennecs took advantage of some of the goal opportunities they were presented.