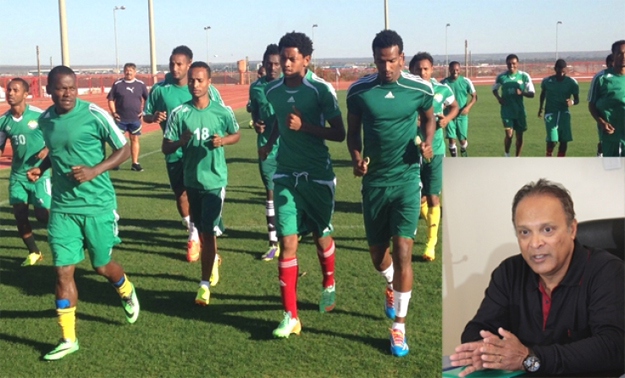 23 men playing facing Algeria to be announced on Monday

Addis Ababa, Ethiopia – Coach Mariano Barreto defended the criticism made on his trip to Brazil to play friendly games against Brazilian clubs who were considered by critiques as small clubs who play in the fourth division of the Brazilian championship.

The national team played five games of which it lost three and drew in two matches. “This doesn’t show they are underestimated. I believe it was a success,” he said.

The national team lost 1-0 to Club de Remu in the first match in Brazil.

Barreto’s side will play Algeria on September 7 for the African Cup of Nations 2015 qualifier after announcing the 23-man-squad on Monday. The national side has already started training on home soil hosting 33 players excluding the professional footballers who are heading to join the national side in the weekend. Barreto also expects to welcome Ethiopian descendants from Sweden. Swedish footballer of Eritrean and Ethiopian descent, Walid Atta playing for BK Hacken and Yusuf Salah playing for FC Tobol are expected to join the Waliyas on Monday, according to Barreto.

While Yusuf had already made his debut with the Waliyas a year ago as the country made an impressive come back on the tournament in South Africa after 31 years, Walid Atta will be the latest newcomer in the national side. He was born in Saudi Arabia in August of 1986 and is currently playing for FK Hacken in Sweden. His career has also been embellished by being included in the squad of European clubs such as Lokomotiva of Czech Republic and Dinamo Zagreb of Croatia. However, he did not appear in any of Dinamo Zagreb’s matches apart from a friendly match against GOSK Gabela, and switched to Allsvenskan’s side Helsingborgs IF. In January 2008, Atta was able to play for the top division side AIK in Sweden too.

The prolific striker Saladin Said of the Egyptian side Al Ahly and FC Bidwits’ forward Getaneh Kebede are both set to join the Waliyas on Saturday to impact the critical match against Algeria on September 7. Algeria on its side has already started preparations waiting for some key players from the professional European leagues. Nabil Bentaleb from the English premier league side Tottenham, and Saphir Taide from the Italian Seria A are world-class squad members lately joining the Algerian national team. After this high-rated group match at the Addis Ababa stadium in September, the Ethiopian national team will play Mali and Malawi respectively, according to their schedule.