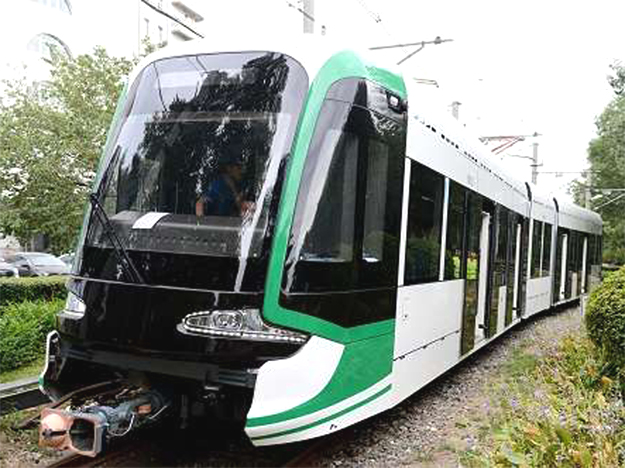 ETHIOPIA: The first of 41 trams being built for the two-line network under construction in Addis Abeba was unveiled at CNR Changchun’s plant in China on August 26.

The trams were ordered in March 2014 and are scheduled to be delivered by January, being shipped via Tianjin and Djibouti with a journey time of about 50 days.

CNR said the arrival of the first Chinese-built trams in Africa would act as demonstrator for Chinese technology, opening the door to other African markets including proposed light rail lines in Kenya, Congo, Zimbabwe, Egypt and Nigeria.

The three-section 70% low-floor cars have an entrance height of 350 mm and a steel and aluminium body designed to combine strength with lightness. They are designed to operate in pairs at speeds up to 70 km/h.

To cope with the effects of strong sunlight at altitudes of 2 400 m, the trams have tinted windows designed to filter out 90% of the ultraviolet rays, and the rubber components and cables are specified to avoid premature ageing. The roof is designed for rapid drainage to cope with sudden heavy downpours, with roof-mounted components in weather-sealed housings. Reflecting typical year-round temperatures between 6°C and 28°C, the trams will have opening windows to save the energy and maintenance costs of air-conditioning.

Two lines are being built by China Railway Eryuan Engineering Group for completion by January 2015. One will run 16·9 km north-south from Menelik Square to Kaliti, and the other running 17·4 km east-west from Ayat to Tor Hailoch. The routes will share tracks for a 2·7 km section between Lideta and Meskel Square. Export-Import Bank of China is providing loans to cover 85% of the cost of the project.

As well as supplying the trams, CNR is to provide staff training, with 50 Ethiopian drivers and maintenance personnel to begin courses during September.