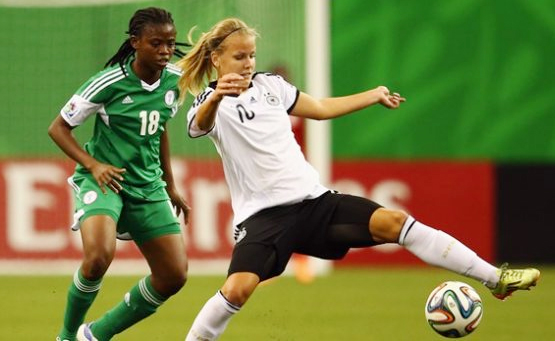 Montreal, Canada – Germany have won the FIFA U-20 Women’s World Cup for a record-equalling third time after a hard-fought 1-0 win over Nigeria at Montreal’s Olympic Stadium.

Lena Petermann scored the title-winning goal eight minutes into extra time to settle a match that, like the semi-final against France, had seen the Germans outplayed for long stretches. For the second match in succession, though, the Europeans’ will to win shone through, as did the quality of goalkeeper Meike Kamper – again named player of the match.

This clash of styles and football cultures was always expected to produce an open, engaging final, and so it proved. Nigeria quickly gained a foothold and went on to dominate the first half, creating the better and more numerous chances. An inability to convert those chances was their only failing, and the most guilty party was tournament top scorer Asisat Oshoala.

The in-form striker, who had scored four times in the semi-final win over Korea DPR, was lively throughout but missed her first golden opportunity after 22 minutes. In fairness, she created the opening out of nothing, robbing Margarita Gidion, outpacing the German defence and rounding Kamper in a stunning display of speed and strength. She could not, however, find the finishing touch, managing only to shoot into the side-netting from an acute angle.

With Nigeria’s superior physical attributes a telling factor on the big Olympic Stadium pitch, it wasn’t long before more chances arrived, with Oshoala again given a sight of goal seven minutes before the break. Again, though, her sights were out, with the ball flashing wide after Chiwendo Ihezuo had done well to snatch possession from Rebecca Knaak at the byline and cut the ball back.

These were nonetheless worrying times for Germany, whose best effort had come from a Lina Magull free-kick comfortably saved by Sandra Chiichii. But Maren Meinert’s side began the second half brightly, with Theresa Panfil and Lena Petermann combining to tee up Sara Daebritz for a powerful left-foot shot that skidded into the arms of Chiichii.

Oshoala remained a constant source of danger, though, and she again came to life three minutes later, jinking in from the left wing past two German defenders. All that was lacking was the final touch, with the No4’s first effort striking a team-mate before the rebound was sliced high and wide.

However, missing chances wasn’t restricted to Oshoala and Nigeria. Germany also spurned their opportunities, with Pauline Bremer stealing in unmarked on a Sara Dabritz free-kick only to head wastefully wide. The Super Falconets then had to call on the bravery of their keeper, with Chiichii racing from her line to dive at the feet of Lena Petermann, picking up a bruised jaw in the process.

Play still tended to rage towards the other end, though, and with five minutes remaining Nigeria had the ball in the net only for their celebrations to be cut short by the assistant referee’s flag. That left extra time to settle this pulsating affair and, after Oshoala had again gone close for Nigeria, it was Germany who found a breakthrough.

Petermann scored it, slotting home from six yards, but the plaudits went to the energetic Bremer, who had robbed left-back Gladys Abasi before driving towards the byline and delivering the perfect cutback.

Nigeria, who had given so much to the match, proved unable to respond. Germany saw out the remaining minutes with a degree of comfort and can now savour the familiar feeling of being crowned champions of the world.

Maren Meinert, Germany coach
The players and I spent the whole summer cheering on the men’s team and their success definitely motivated us. We didn’t necessarily expect to follow them and be standing here as champions, but we’re very proud – and the quality of teams we’ve beaten along the way makes us especially proud. One crucial thing today was that we played very well defensively as well as offensively, and the whole team worked hard to achieve that. We knew Nigeria were very strong and play a high-tempo game, and that there would be times when our defence was overrun. But we restricted them to only a few shots on goal, so I think we defended against them well. Every one of my girls put in 100 per cent and the win, in my opinion, is definitely deserved. We showed again today that we are strong physically and that has a lot to do with our fitness coach. But it also has a lot to do with our players’ mentality as they want to give everything until the very last minute. They know it hurts in the last 20 minutes but they keep going anyway, and today our physical strength towards the end of the match was definitely a factor.

Peter Dedevbo, Nigeria coach
There are lots of good teams in this tournament who crashed out earlier than us, whereas Nigeria – not generally seen as the best – made it all the way to the final. Today, we had enough opportunities to win this match in the first half alone. But while we had chances and didn’t take them, Germany had one chance and took it. That’s the nature of football. I’ve not spoken to the girls yet but I will tell them to take this defeat hard and learn from it because we lost this game due to tactical indiscipline. We had a great opportunity to win a World Cup with the chances we had in the first half, but we threw that chance away. Be that as our may, we did our best to redeem Nigeria’s image. I haven’t spoken to my players yet as I don’t want to say the wrong thing to them now. But I will talk to them tomorrow once everything is calm and get through the message I want to put across.