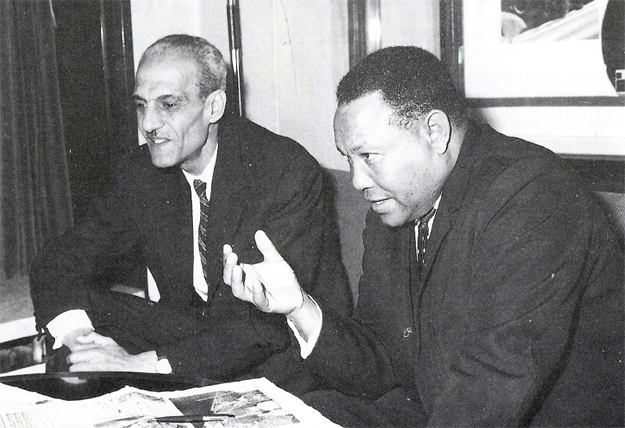 Yidnekachew Tessema, the father of Ethiopian and African Soccer, passed away on August 19, 1987 after a long battle with cancer. Although 27 years have passed since the death of this great orator and philosopher, the contribution he has made to Ethiopian and African soccer, is felt even today.

I wrote this article about him a few years ago, and I hope that it would give today’s young Ethiopian players, fans and team leaders a glimpse of who the man was.

At first, I wanted to write a paragraph or two about him as part of the history page of Ethiopian soccer. But that would have been unfair to the man, who has made great contribution to the development of soccer in Ethiopia. He was a player, a coach, an educator, a leader and above all, he was a fighter for African soccer. I’ve the distinct pleasure to have known this giant of a man, whom I had interviewed several times during my days as a sports journalist in Ethiopia, in the late 70s.

He was intelligent, witty and fluent in four languages (Amharic, English, French and Italian). He also studied Arabic and Swahili. Several articles have been written about him by the foreign press admiring his dedication and contribution to Ethiopian and African soccer. Yet, the man was never fully understood by his own countrymen, and it wasn’t until after his death in 1987, after a long battle with cancer, that people realized that his death was a major loss for the country.

The Player
Yidnekachew was the “Puskas” of Ethiopia. Short and stocky but technically gifted player. I saw him play in friendly matches for the veteran Ethiopian national team after he retired. He was older and much heavier than his playing days but his ball control, accurate passes and mesmerizing dribbles lead you to believe that he must have been a really good player in his days.

He joined his first and only club, Saint George, when he was 14 years old, and it would be another 23 years before he hanged up his boots. Talking about boots, it is said that Yidnekachew was the first player in Ethiopia to have played wearing soccer shoes.

He also played 15 times for the national team (1948-54), and had scored three goals. But his greatest contribution to Ethiopian soccer would come later on after his playing days were over.

The Coach
He served as coach for both the Saint George and the Ethiopian national teams. A great admirer of the Brazilian soccer, Yidnekachew brought to Ethiopia a new style of play with flair and imagination never seen on the continent of Africa. And it was under his leadership that the team won the 3rd African Nations Cup in 1962.

The 60s were probably the best times in Ethiopian soccer. It was during this time that St. George emerged as the number one team in the country. Once again, Yidnekachew, who was instrumental in the success of the national team, repeated his magic with his club side.

Team Leader
I guess he must have been asking himself if he was successful as a player and a coach, why stop there? It is hard to deal with the ego of one or two good players, but when you have five or six; the job of a team leader becomes a big burden. Yidnekachew would use his great talent as a great communicator and psychologist to balance the power and create a friendly atmosphere in the team. He served successfully as team leader for both the St. George and the Ethiopian national teams.

Founder of Football Federation
Yidnekachew was the co-founder of the first Ethiopian Sports Office, which would lay the foundation to the creation of the Ethiopian Football Federation (EFF) in 1943. Being a devoted individual that he was, he did everything himself from translating all the rules and regulations of the games, to training referees, coaches and administrative staff. And he did it all with a meager budget of $125, that he had to borrow.

Yidnekachew was also instrumental in opening the country to outside contacts and international competitions.

Jack of All Trade
Yidnekachew was indeed a jack of all trade. He did the first live play-by-play radio commentary from Tel-Aviv to Ethiopia in 1963 when the two countries played a World Cup qualifying match. He was also the team leader and coach at that time.

Yidnekachew’s contribution to the game was not limited to Ethiopia alone. He also served various international sports bodies as:

1. Confederation Africaine de Football (CAF)- 1957-1997, published by CAF in 1997 to celebrate its 40th year anniversary.
2. In The World and in the World of Sport, by Tadele Yidnekachew Tessema. Published by United Publishers in 1998, Addis Abeba, Ethiopia.