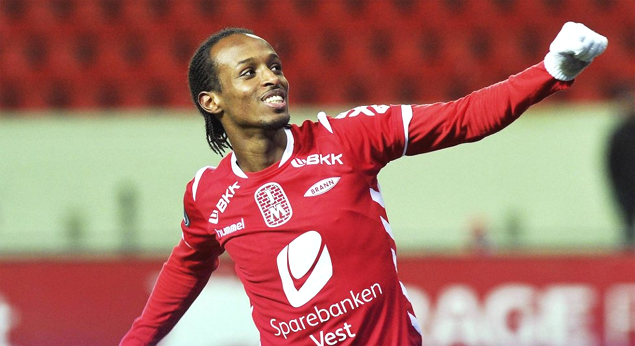 Amin Askar’s desire to play for Ethiopia might soon be fulfilled after coach Mariano Barreto made a call to the talented winger from his base in Norway where he plays for SK Brann in the Norwegian league and to further add bright light to the Walia Ibex prospects Ethiopian football Fedetration(EFF)President revealed to Soka25east.com he was requesting all Ethiopian players outside the county to submit their documents.

Amin Askar in an Interview with Supersport.com Collins Okinyo last year intimated that his wish was to play for his motherland a place he left while still a young lad when his parents migrated to Norway.

Born in Teferebar ,Ethiopia in 1985 now plays top flight football for SK Brann in the Norwegian league but his thoughts wander back to his roots despite on several occasions being called upon to play for Norway at the senior level.

“I was very happy i received a call earlier in the month from coach Mariano Barreto who shared with me his vision for Ethiopian football and asked if i could join and to be sincere playing for Ethiopia has been my dream and my wish and hopefully i will finally live my dream by representing them at the highest level.I like coach Barreto he has big plans for Ethiopia and this will be a good drive for the team”Amin Askar exclusively told Soka25east.com

As for EFF President Junedin Basha his thoughts were clear on the move “We are sending out information to all Ethiopian players outside the country and interested in playing for our national team the likes of Amin Askar,Walid Atta,Yusuf Salah and many more they should send their infomation that include copy of passports,current team and position so that we can access them then proceed with the necessary details once everything is inorder”Junedin told Soka25east.com

Amin Askar is endowed with speed,determination and a goal scoring ability scoring some fantastic goals for his club in Norway.

Askar won the prize for the best goal scored in Norway last season and the soft spoken player cannot wait to put on an Ethiopia jersey to bring his experience home.

Ethiopia who are currently in Brazil in a training tour are in a tough group with the likes of Algeria who impressed at the 2014 World Cup Mali and also Malawi.