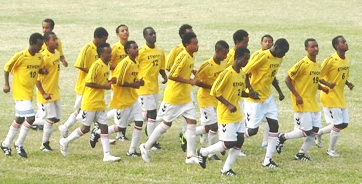 Addis Ababa, Ethiopia – The Ethiopian National U-17 team was held to a goalless draw by its Gabonese counterpart in the first leg match of the second round of the 2015 CAF U-17 Championship.

A total of 11 matches took place over the weekend, with three matches ending scoreless and four matches witnessed just 1 goal each. Meanwhile, the Ivory Coast and Uganda had a field day as they defeated Libya and Rwanda 4.-0 respectively.

The second leg matches will take place during the week of August 1-3, with the winners advancing to the final round.

The final tournament will be held in Niger from February 15 to March1, 2015. The semifinalists will qualify for the 2015 FIFA U-17 World Cup scheduled to take place in Chile.