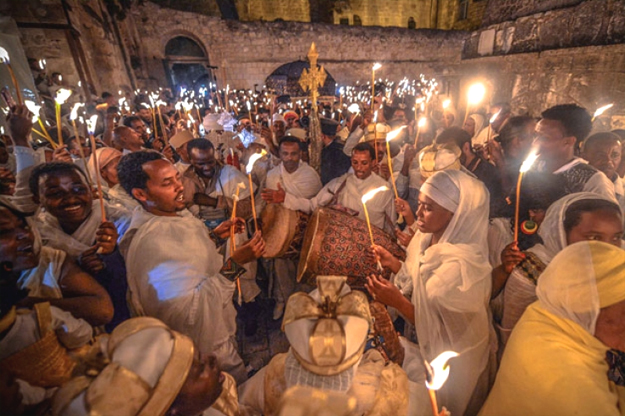 Addis Ababa, Ethiopia – Thousands of years of strong connection and a strong bond that cannot be broken by wars or government relationships is the relationship of Ethiopians with Jerusalem.

Jerusalem might resemble the ‘city of  God’ for many Ethiopians. The kings who want to conquer Jerusalem or a replacement of Jerusalem by Lalibela shows how they have treasured the place since ancient times.

The distance was bearable for the ancient Ethiopians who crossed miles, mountains, and rivers against all odds to get to Jerusalem and build many monasteries and receive blessings.

Some places are considered sacred and many take the journey to get salvation, cleansing, purity. With this spiritual connection of a place, many people of different religions take journeys to their holy places. Many who grew up in a Christian culture praise Jerusalem, reading from the scriptures of psalms, and the stories of Jesus and the disciples have a very strong attachment with Jerusalem. Estifanos Mekasha, 32, is one of them.

On a spiritual tour he took his mother to the “promised land”. His ideas of Jerusalem are a bit extreme, saying it is an “earthly paradise.”  Growing up in an Orthodox Christian culture like many, he had a vivid dream of what Jerusalem would be.

This year he wanted to take the long-awaited pilgrimage to Jerusalem. Finally, being in that historical place gave him mixed feelings. He expected all the monasteries to have biblical time’s distinctive features.

But contrary to his idea, those places had urban settings, thankfully the symbols still made his pilgrimage full. While he was on a ship to the Sea of Galilee; sites of Jesus’ early ministry, reminiscing on thousands of years ago on how Jesus preached while going back and forth on the boats, his heart was filled with warmth.

Being in that place also brought his mother to tears. For him this was a place of rebirth and even after getting back, the feeling remains surreal. The Ethiopian community from different corners of the world also make the place feel like a little Ethiopia. He does not forget what one Indian asked him, “Aren’t you Ethiopians poor people?’, seeing the number of the Ethiopian community. And his answer was, “Maybe but we Ethiopians will sacrifice anything for our religion.”

Ethiopians celebrate Easter together in the Der Sultan Ethiopian monasteries, which traces its history back to the Queen of Sheba.