Addis Ababa, Ethiopia – Dr. Taleb Rifai, the Secretary-General of the United Nation’s World Tourism Organization (UNWTO), said the world should learn to live in unity and harmony from Ethiopians. 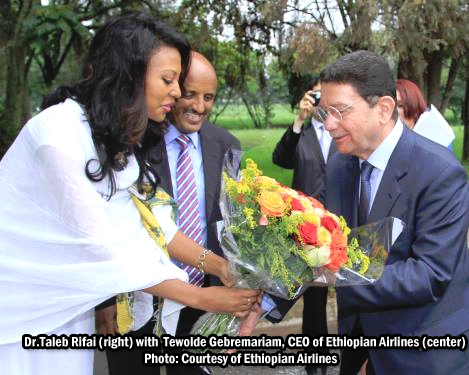 The Secretary-General was accompanied by the Ethiopian Minster for Culture and Tourism Amin Abdulkadir on a trip to tourist attractions in the north of the country, where they paid a visit to the rock hewn churches of Lalibela, the obelisks at Axum, St. Mary’s Church in Axum, Axum’s Museum and the Nejashi Mosque.

Dr. Rifai stated Ethiopia is endowed with age-old tourism sites reflecting historical, religious, and cultural values. He added the wide-spread culture of tolerance among different religions and peoples in Ethiopia are exemplary to the world. “I want the whole world to come & see this beautiful country, to see what I saw which is truly beautiful.”

Ethiopia, he has understood during his visit, is a world class tourism destination that should be visited by millions of people from across the world and he vowed to promote the historical, cultural, religious and natural attractions as well as the culture of peaceful co-existence of the country globally.

Ato Amin on his part said, the visit of the Secretary-General of the UN’s World Tourism Organization has a tremendous impact in publicizing Ethiopia’s rich historical, cultural and natural attractions. He asked Dr. Rifai to promote some of the unique tourist attractions of the country at a world stage.

The visit also aimed at highlighting the country’s efforts in the renovation and revitalization of some artifacts for further preservation.

Ato Mulugeta Seid, State Minister of the Culture and Tourism Ministry said, although Ethiopia has a wide and deep historical heritage, it is not well publicized. He added the visit by the Secretary-General of the World Tourism Organization will help promote the many tourist attractions of the country.