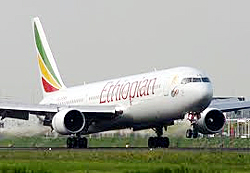 The airline has reportedly been flying to the towns since the July 1, 2014.

Chief Executive Officer of the airline, Tewolde Gebremariam, said the new flight service will enable travelers from Ethiopia and across the world destined to the towns to travel whenever they want.

According to the CEO, the airline connects the towns directly with the world by boosting domestic flight services in line with its “Vision 2025”.

The current 18 local destinations of the airline would reach 26 after a decade in line with its plan, he explained.

Meanwhile, Ethiopian Airlines is promoting the tourist destinations of Ethiopia to the world on the American cable and satellite television channel CNN by allocating huge sum.

To increase its competitive edge and become the first choice of travelers, Ethiopian had introduced 40 percent discount on all domestic flights.