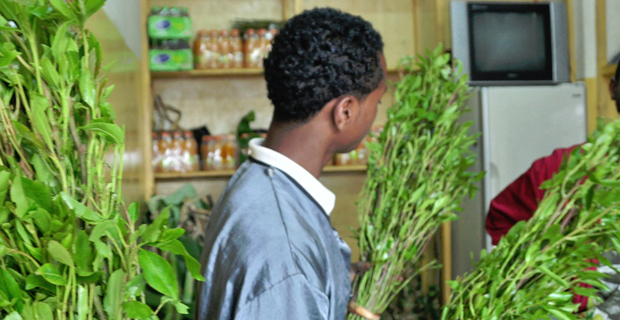 Addis Ababa, Ethiopia – Just like most of his countrymen in the East and West Haraghe Zones of the Oromia region, there is a lot at stake for Abdella Yusuf, 41, with the one item he knows most, Khat, coming under threat.

The legend behind the discovery of this addictive leaf is very much the same as that of coffee: A Yemeni herdsman, on seeing his goats becoming overactive after chewing the leaves, tried it for himself, before sharing his wisdom with the world.

As the elder son of a Khat farmer in East Hararghe Zone, Abdella has been on the farm helping his father since early childhood.

Khat has served many purposes in his locality. On top of being a means of making a living for almost all of his neighbourhood and extended family members, it is used to welcome and entertain guests, in mourning, at weddings and during collective labour.

He withdrew from school in grade eight, becoming one of the numerous small scale Khat traders supplying different varieties of the crop with different vernacular names in Dire Dawa. He expanded his business upon reaching the market in Addis Abeba during his early 20s.

Successful enough to find foreign markets for the green leaf he regards as “the one I know most”, he began exporting Khat to China a decade and a half ago. Business was going well; so too was life. He has married and became a father to a daughter. There were no problems of supply from the East and West Hararghe Zones. No problem of market too. He was sending between 800kg to 1000kg of dry and fresh Khat he acquired from farmers in Aweday – the place most famous for quality Khat – and Baddessa, another famous region for the crop. Almost a decade in the business and with an increasing number of daughters, now four, the first blow came when China banned Khat from crossing its border.

“When China banned Khat, I was quite confused at first,” he recalls. “My best experience and knowledge is all about Khat, I don’t know what to do if not Khat.”