The management of Ethiopian Airlines is planning to open a new route to Los Angeles, US, via Dublin, Ireland.

Addis Ababa, Ethiopia – Ethiopian operates a daily flight between Addis Ababa and Washington DC and Los Angeles will be the second destination in the US for the airline. Ethiopian CEO Tewolde Gebremariam told The Reporter that his management is planning to start flights to Los Angeles via Dublin. â€œSince it is a long flight we need a stopover. And we are planning to make a stopover in Dublin. We have secured a traffic right from the Ireland Civil Aviation Authority,â€ Tewolde said. If everything goes according to schedule, Ethiopian will launch the flight to Los Angeles next year.

Ethiopian serves 80 destinations in five continents with 67 aircraft. Ethiopian, the fastest-growing African airline, is expanding its route network fast. Recently, it added Shanghai, Kuala Lumpur, Singapore and Vienna to its route network. It will also launch new flights to Ho Chi Minh City, Manila and Tokyo in the near future.

In a related news, the management of Ethiopian Airlines will announce the result of the bid to buy 20 narrow aircraft. 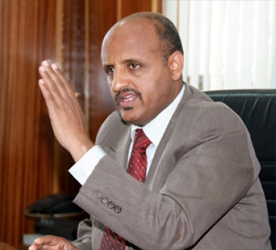 Last January Ethiopian issued request for proposal (RFP) inviting companies to present their proposals for the supply of narrow-body aircraft. Consequently, Mitsubishi of Japan, Ilyshin of Russia, Embraer of Brazil, Bomardier of Canada, the European consortium Airbus and the US airframer, Boeing, submitted their proposals to Ethiopian. The companies proposed regional jets with 80-120 seats. Ethiopian could buy up to 20 narrow-body aircraft that it will deploy on its regional routes.

Mitsubishi has presented its MRJ jets. Ilyshin Finance CO. proposed the Sukhoi 100 aircraft. The Brazilian manufacturer presented the E-Jets. Bombardier came up with the C-series aircraft. Boeing proposed its new B737 MAX aircraft while its European arch rival Airbus demonstrated the much- touted A320NEO aircraft.

The technical committee of Ethiopian evaluated the proposals submitted by the six companies. Tewolde told The Reporter that the evaluation process is being finalized. According to Tewolde, the result of the bid will be announced next month.

Ethiopian has the youngest fleet of aircraft in Africa with an average age of seven. Â In line with Ethiopianâ€™s 15 year development roadmap, Vision 2025, the carrier plans to double its fleet to 112 planes and carry 18 million passengers over 92 routes by 2025.