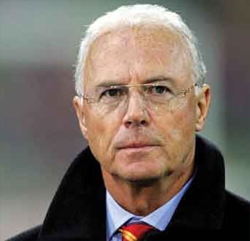 Fifa has provisionally banned World Cup winner Franz Beckenbauer from all footballing activities for 90 days for failing to co-operate with the Qatar 2022 corruption inquiry.

Beckenbauer, who won the World Cup with West Germany as a player and as a coach, had been asked to help with a Fifa ethics investigation.

The 68-year-old was part of the Fifa executive committee which voted to give the tournament to Russia in 2018 and Qatar in 2022.

He left Fifa’s executive committee in 2011 but remained on their football committee.

Beckenbauer captained West Germany to victory at the 1974 World Cup, and was coach when they next lifted the trophy 16 years later.

He then managed at Olympique Marseille and Bayern Munich, later serving as president of the German club.

Fifa say Beckenbauer ignored “repeated requests” to assist with an independent investigation into the bidding process for the 2018 and 2022 tournaments which is being led by American lawyer Michael Garcia.

Beckenbauer has claimed he did not respond to an interview request because he did not understand all the questions that were sent to him in English.

World football’s governing body say he was asked to supply answers to written questions provided in both English and German.

In a statement, Fifa said: “The apparent breach relates to Mr Beckenbauer’s failure to co-operate with an ethics committee investigation despite repeated requests for his assistance.

“The case is now the subject of formal investigation proceedings being conducted by investigatory chamber member Vanessa Allard as chief of the investigation.”