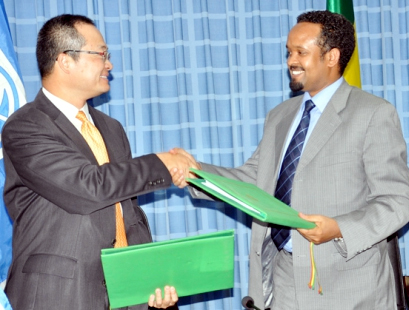 Of the total amount 178.5 million USD is provided in the form of loan, while the balance (24.5 million USD) is donation.

The money will be used to finance two potential geothermal sites, namely the Aluto Langano and Alalobad and help establish an institutional framework for geothermal development.

The Geothermal Sector Development project (GSDP) will help the government to fulfill the increasing domestic demand for electricity by diversifying its power generation sources and tapping into its substantial geothermal energy potentials.

The domestic demand for electricity in Ethiopia is expected to grow by more than 25 percent per year. Over the next five years, Ethiopia intends to significantly expand electricity coverage, reaching 75 percent of towns and villages and connecting four million consumers to the grid.

The power generated from geothermal plants will provide electricity directly to the grid and allow more households and businesses to connect at affordable rates.

In March 2013, the WBG announced a major international effort to expand renewable power generation in developing countries by tapping into the underutilized resource, geothermal energy.

The project will continue to support the joint effort of the Climate Investment Fund/Scaling-up Renewable Energy Program (SREP) and the WBG to promote development of geothermal energy across the globe.