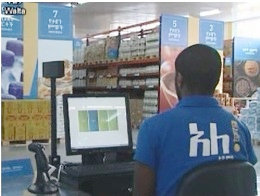 Alle* (also known as Ethiopian Trading Enterprise) is a state-owned and privately managed business enterprise which aims to supply food and other consumer goods at a competitive price from nationwide cash and carry stores.

In his inaugural speech, Prime Minister Hailemariam said the enterprise is part of the governmentâ€™s trade system reform that seeks to create competitive and market oriented business environment in Ethiopia.

The wholesale market in Ethiopia has been dominated by few powerful suppliers and Alleâ€™s introduction is expected to spur more competition into the market and ultimately bring prices down passed on to retailers.

â€œIn the past, consumers were left without options and were forced to accept price inflation due to the unfair business ties between these few suppliers,â€ Hailemariam said. â€œWe hope the private sector will draw lessons from [Alleâ€™s] unique business model.â€

The store inaugurated in Megenagna, located in front of Ethiopian Standard Agency, is the first of chain of stores planned to be opened in the future. Two stores currently being built in Kality and Mercato locations in Addis Ababa are expected to be open soon.

Kebede Chane, Minister of Trade, said the government considered welcoming international giants such as Wal-Mart into Ethiopia but with the interest of protecting the fragile domestic private sector, the government chose to set up a â€œWal-Mart-likeâ€ domestic enterprise.

â€œThe enterprise buys the products directly from manufacturers at home and abroad and thereby avoid the unnecessary market chain which has been driving prices of consumer goods high,â€ Kebede added.

According to Nuredin Mohammed, general manager of Alle and advisor at the Ministry of Trade (MoT), the enterprise plans to open 36 stores in 25 major towns across the country in three years.

â€œThis will enable us to have a 25 to 30 percent market share in the country offering products with a five to 10 percent price lower than the competition,â€ Nuredin said.

Ethiopian officials and A.T. Kearney say the new cash-and-carry would be run as a private business, with some Ethiopians returning from the large diaspora to join the management team. The assortment of products is also expected to expand with the inclusion of vegetable items that require refrigeration.

*Alle =The Amharic name Alle Bejimla, which will be known as just Alle in English, literally translates as â€œwholesale is availableâ€.