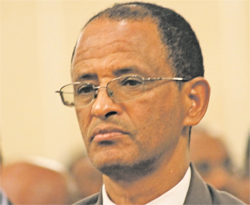 Addis Ababa, Ethiopia -Â The National Bank of Ethiopia (NBE) has allowed local and foreign private companies to engage in one of the more modern businesses in the financial sector, the capital goods leasing business, The Reporter learnt.

Governor of NBE, Teklewold Atnafu, told The Reporter in an exclusive interview that any Ethiopian or foreign citizens who seek to engage in the capital goods leasing business can take part after fulfilling the requirements, as it is common when forming a share company like banks as well as insurance companies.

He added that the service is similar with the banking service. â€œBanks are providing finance while capital good leasings are providing goods,â€ he said.

â€œThe only financial business which is already permitted for foreigners to partake in is finance leasingâ€ Teklewold said, adding that the government came to this decision as it does not have a negative impact on the main financial sector.

â€œTherefore any local or foreign citizen can fully engage in this business,â€ he told The Reporter.

According to NBE’s directive, 200 million birr is needed as a minimal requirement to engage in this particular sector.

It can be recalled that the House of Peoples’ Representative recently endorsed the provision of capital goods leasing.

According to the proclamation, micro finance institutions are not necessarily obliged to get a license to engage in this business.

According to the information obtained from NBE, around five companies have shown interest in entering into this newly allowed business. All of them are said to be local companies and are currently awaiting the bankâ€™s approval.

The capital goods leasing business proclamation has set the stage for the emergence of the sector in Ethiopia, most significantly the system of Finance Lease and Hire-Purchase businesses under the supervision of the central bank.

The business of capital goods leasing, including any equipment or machinery used in production or service rendering companies, was permitted under proclamation No. 103/1998. The old proclamation mandated the Ministry of Trade (MoT) to license all equipment-leasing businesses, which according to the preamble, has led to the amendment. The equipment leasing business, as per the amendment, has three distinct categories: Operating Leasing, Finance Lease and a Hire-Purchase system. The first category, operating lease, will still fall under the realm of MoT and is the standard equipment rental agreement, where the user of the machinery makes payments for the short-term use of the products.

The second type however, finance lease, will involve long-term leasing contracts where the user retains long-term rights in exchange for regular payment. At the end of the contract period, if the payment made by the user covers the cost of the product over the years after accounting for depreciation cost, he/she might retain ownership of the equipment or not, upon termination of the contract, the proclamation stipulates. But, the ownership right remains in the hands of the leaser throughout the payment period.