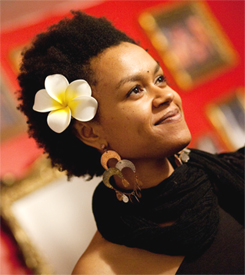 Meklit Hadero, known simply as “Meklit”, is a singer and songwriter based inÂ San Francisco, California. She is known for her soulful performing style, and for combining jazz, folk, and East African influences in her music. Born inÂ Ethiopia, she was raised in the U.S. and attended college at Yale, where she studied political science.

Shortly after graduation, Meklit moved to San Francisco and became immersed in the city’s thriving arts scene. “[Meklit] is an artistic giant in the early stages,” wrote a reporter from theÂ San Francisco ChronicleÂ after witnessing an early performance in the city’s Mission District. “She sings of fragility, hope and self-empowerment, and exudes all three. What’s irresistible, above all, is her cradling, sensuous, gentle sound. She is stunning.”

Named aÂ TEDÂ Global Fellow in 2009.Â She is the founder of theÂ Arba Minch Collective, a group of Ethiopian artists in diaspora devoted to nurturing ties to their homeland through collaborations with both traditional and contemporary artists there. As a Senior TED Fellow since 2011 , she co-founded the Nile Project with Egyptian ethno-musicologist Mina Girgis and has since participated in 2 artist residencies (Aswan, 2013 and Uganda in 2014) uniting musicians from 11 countries all along the Nile Basin .