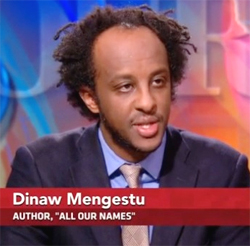 Â Dinaw Mengestu talks about his new novel â€œAll Our Names,â€ which narrates the story of a young black man who comes of age in post-colonial Africa and the young white woman who meets and falls in love with him in a small Midwest American town. Mengestu spoke to chief arts correspondent Jeffrey Brown about lost and found identities and a collision of worlds.

Life in post-colonial Africa and the civil rights era in the United States arenâ€™t typically compared, but Dinaw Mengestu, author of the new novel â€œAll Our Names,â€ saw those moments in history as an echo of each other.

â€œWe tend to think of what happens in post-colonial Africa as very distinct from what happens in the U.S., but when I began to put those narratives side by side, I thought, well, after the end of colonialism we had something similar in America,â€ Mengetsu told chief arts correspondent Jeffrey Brown.