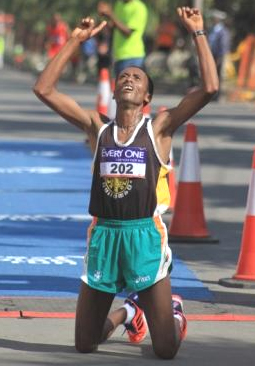 Hawassa, Ethiopia -Â Tenaw Belete won the biggest race of his career in the 2014 EVERY ONE Campaign Half-Marathon Race in Hawassa on Sunday 11th May, while Yewebdar Teshome stepped up from her ninth place finish in 2013 to become this yearâ€™s womenâ€™s champion. Meanwhile in the mass 21km race there were wins for Yibeltal Biyalf (1:20:17) in the menâ€™s race and Kirstin Mitchell (1:40:03) in the womenâ€™s race. Including the mass 7km race and the childrenâ€™s races more than 3,500 participants took part in this yearâ€™s EVERY ONE races.

Belete runs for the same Omedla Police club as Haile Gebrselassie. To win this race in a new personal best time of 1:03:29 was a big step up in his career. As he explained after the race: â€œLast October I finished 3rd in the inaugural Haile Gebrselassie Marathon in Hawassa and won 15,000 birr. Before then Iâ€™d been struggling with not having enough money to cover my food and rent, but now this money will give more stability to my training. Iâ€™m now training with the national marathon squad under Abebe Mekonnen and feeling confident about the future.â€

In the womenâ€™s race Yewebdar Teshome made no mistakes in claiming her first big domestic title on the roads. Following her 9th place finish in the same race a year ago, she started training with a group of strong runners in her Central University College club and made a big breakthrough when finishing 2nd in a half-marathon in Vadadore, India last December in a time of 1:11:40. Here she waited until the final 3 kilometres before making her break, but still had to fight hard in the raceâ€™s closing stages to see off Emeshaw Nigussie who finished just four seconds behind her.

Now in their 5th year the EVERY ONE Campaign Races supported by Save The Children and World Vision have a bright future. Save Country Director John Graham highlighted the success Ethiopia has achieved in reducing mortality rates among newborns and mothers â€“ one figure quoted as evidence is the reduction over the past twenty years from 260 to 67 per thousand in the number of deaths of newborn babies in their first year â€“ and said that with USAID support Save had committed a further $15m to its child and maternal health programmes for the coming year.

â€œThis is a long raceâ€ said Graham on the eve of the race. â€œThereâ€™s already a fair amount for us to celebrate, but thereâ€™s still a lot of work for us all to do.â€