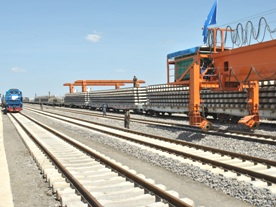 Addis Ababa, Ethiopia (WIC)Â – The construction of Mieso-Dire Dawaâ€“Dewanle railway project entered a new phase with the commencement of the laying of the tracks.

The 339km single track railway line is part of the Addis Ababa-Djibouti railway project whose overall progress has reached 37 percent.

The official ceremony of the laying of tracks was held on May 8, 2014 in MelkaJebdu, one of the future stations in Dire Dawa City.

The ceremony was attended by Prime Minister Hailemariam Desalegn and Moussa Ahmed, Minister of Equipment and Transport of Djibouti, as well as senior government officials.

The Addis-Djibouti railway will enable Ethiopia easy access to the port of Djibouti providing both passenger and freight service transporting 3,500 tons of goods at a time.

â€œThis project will enable our country to be competitive in the international market by curbing logistical costs caused by the current poor transport system,â€Hailemariam said during the ceremony.

â€œWe are confident and competent to accomplish this project on schedule with the allocated budget and the expected quality,â€ Getachew Betru (Dr/Eng.), director general of ERC, said on the occasion.

The Addis-Djibouti Railway stretches a total length of 756km, out of which some 100km will be built within Djibouti.

The first section of the project stretching 317km from Sebetta to Mieso is also under construction by the China Railway Engineering Corporation (CREC), the same company undertaking the Addis Light Rail Project.

When completed the Addis-Djibouti electrified railway, a priority project within the GTP, is expected to reduce the travel time from Addis Ababa to Djibouti by half to less than ten hours with a designated speed of 120km/hour.

The railway will have 17 major stations and passes through major cities including Bishoftu, Adama, Metehara and Dire Dawa.The 107kms from Addis Ababa to Adama line is a double track while the rest 549 kms is a single track rail.