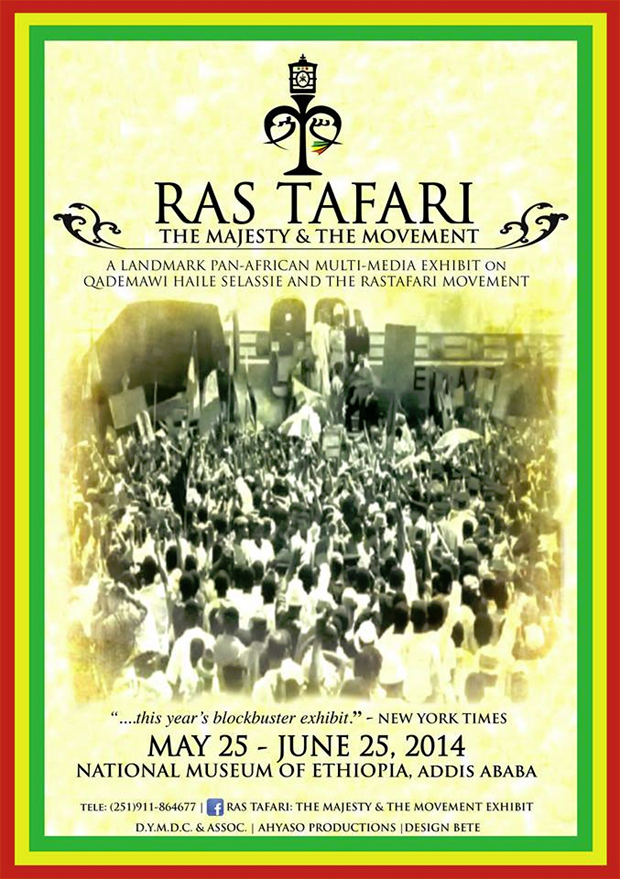 Addis Ababa, Ethiopia -Â With the idea of celebrating the ancestors and glorifying their work, there will be an exhibition entitled Ras Tafari; The Majesty and the Movement Exhibition from May 25th to June 25th in Addis Ababa at the National Museum and in Shashemene.

This exhibition aspires to contextualize and interpret the contributions of Emperor Haile Selassie I towards pan Africanism and African liberation in Ethiopia and abroad while simultaneously documenting the journey and impact of enslaved African descendants and their struggle to return to their homeland, following the RasTafari movement.

Starting its narrative by Rastafari people and connecting it with Emperor Haile Selassie and the black liberation movement, there are installation pieces as well and paintings covering Atlantic slave trade.

According to Desta Meghoo (Ph.D.) the organizer of the event, this connection of the Diasporas started during Emperor Menelilkâ€™s regime and this exhibition follows the journey and the trials and triumphs from slavery and colonialism to racial and economic injustice social and cultural development to independence and repatriation.

The exhibit is divided into 12 categories that address the history, development, impact and influence of the Emperor Haileselassie and the movement. Â Moving movements from the recreation of the slave ship experience to Marcus Garveyâ€™s Black Star Liner, the euphoria of the black world at the victory of Adwa and Emperor Haile Selassieâ€™s coronation will be presented with photographs, rare paintings, furniture, and film.

Responses of solidarity during the Italian occupation are also included as well as the hardships faced by early Rastas in the mid 20th century for claiming to be Ethiopian. Contemporary content including the impact of reggae music through the works of Count Ossie, Bob Marley and Peter Tosh will be covered as well.

The impact of Emperor Haile Selassie on the development of the OAU and his relationship with African leaders from Ghanaâ€™s Kwame Nkrumah to Kenyaâ€™s Jomo Kenyatta and his help to the then freedom fighter Nelson MandelaÂ will be highlighted. Simultaneous exhibitions will be hosted in Shashemene and Harar/Ejersa Goro to encourage cultural tourism and a nyabinghi drum ceremony will be held in Entoto.

â€œThis is to memorialize the contribution of the elders/ the ancestors and not to forget what they did,â€ Desta said.

In the exhibition quotes from Haile Selassie, paintings, pictures, including the works of Gebre Kristos Desta created in 1954 will be depicted. Apart from the rare photographs; archived documents, cultural artifacts, panel discussions, film screenings and armaments will be open to the public. Most of the pictures and paintings were available at the National museum archives, which were handed over by the Derg regime after the coup.

Apart from that, this exhibition will also challenge the stereotypes and myths about Rastas and their philosophy.

The exhibition is also scheduled to tour in different African countries for four years starting from Ghana. According to Albert Yankey, Ghanaian Ambassador to Ethiopia and the African Union noted that this exhibition is a continuity to hampering neo-colonialist interference and to strengthening the relationship of all Africans.

Facebook Page:Â Ras Tafari;Â The Majesty and the Movement Exhibition