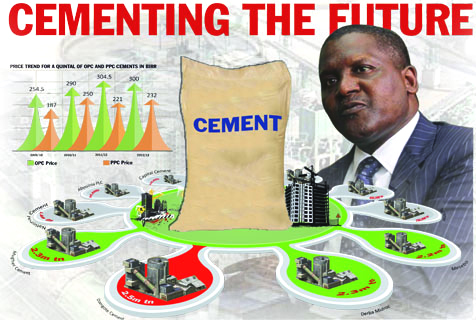 Addis Ababa, Ethiopia -Megaphones blare safety announcements in Amharic, Chinese and English at a busy worksite, as the workers and machines of Dangote Cement hum together. They are building the cement factory belonging to Africaâ€™s richest man â€“ the 25-billion-dollar Nigerian, Alhaji Aliko Dangote.

Work has been going on here since October, 2011, on the 134ha expanse of land the Company has leased in Rechi Mekoda Kebele, 80km west of Addis Abeba on the outskirts of Mugher, in the Adaberga Wereda of Western Shoa, Oromia. When Fortune visited the site on Wednesday, April 30, 2014, Dangoteâ€™s workers, who have already erected four massive storage rooms, power stations and silos, were busy finalising the laboratory and other facilities. The project, which is expected to become operational in November 2014 with a yearly production capacity of 2.5 million tns, is only 13pc away from completion of the civil work. The entire project, including the mechanical and electrical works, is 59pc complete.

This project is part of Dangoteâ€™s endeavour to prove that it can succeed in the broad African market, which it seeks to dominate as part of its bid to be listed on the London Stock Exchange(LSE).

Dangote, the 23rd richest person in the world, who studied business at the Al-Azhar University in Cairo, Egypt, established Dangote Industries (Ethiopia) PLC in 2008 as a subsidiary of the Dangote Group -Â  based in Lagos, Nigeria. The group that is engaged in cement, sugar refinery, flour and oil earned in excess of two billion dollars in 2011 and employs around 25,000 people all over the continent.

The Ethiopian business, which will cost 550 million dollars, is part of a three billion dollar entry into the cement markets of 16 African countries, including, as priority targets, Senegal, South Africa and Zambia.

The period between the time when Dangote first entered into Ethiopia and when it began the construction of its factory was characterised by a severe shortage of cement, high prices and large imports â€“ all of which will change in a matter of a few years to the dismay of many of the local manufacturers.

When the government introduced the five year Growth & Transformation Plan (GTP) in 2010/11, cement looked poised for a propitious market.