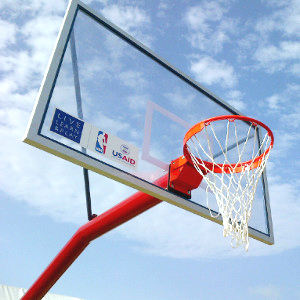 The National Basketball Association (NBA) and the US Agency for International Development (USAID) today launched â€˜Live, Learn and Play,â€™ a new partnership that will include a comprehensive basketball-based youth development program aimed at using the values of the game including leadership, character and teamwork to promote youth development and citizenship in 20 schools in Senegal.

The program tipped off today at the John F. Kennedy High School in Dakar, Senegal, with a launch event on a newly renovated basketball court featuring dignitaries from USAID, NBA Africa and the SEED (Sport, Education & Economic Development) Project. Over 100 local children from participating schools were then put through their paces in a series of clinics under the expert tutelage of Minnesota Timberwolves forward and SEED Project alumnus Gorgui Dieng together with WNBA Legend and fellow Senegalese native Astou Ndiaye.

â€œPartnering with USAID on this program provides an important vehicle for using the sport of basketball and the values of the game to develop future leaders who will be able to positively influence youth development in sub-Saharan Africa,â€ said Amadou Gallo Fall, NBA Vice President for Development in Africa. â€œWe are very excited about this partnership and look forward to working with USAID to utilize our expertise and make an impact in Senegal.â€

â€˜Live, Learn & Playâ€™ will use basketball and the values of the game as a vehicle to teach life skills and promote leadership to boys and girls between the ages of 13 and 15 in 20 schools across Senegal. Each of the schools participating in the program will conduct at least two basketball practices per week, with games and tournaments held on weekends. Practices will take place at each of the participating schools and will each feature up to 48 students â€“ including both boys and girls.

â€œUSAID has a long tradition of using sport in global development and we are excited to team up with the NBA to launch a program that will transform the lives of boys and girls across Africa,â€ said Mori Taheripour, USAID Senior Advisor for Sport for Development. â€œItâ€™s fitting that we are launching this program today in Senegal, where basketball is a true catalyst for advancing youth development. This is why â€˜Live, Learn and Playâ€™ is focused on training and supporting coaches, because we know what a critical role they play in the lives of youth. We look forward to continuing our work with the NBA as we seek to expand the program to other countries in Africa.â€

â€˜Live, Learn and Playâ€™ includes a comprehensive coaching development element with a curriculum designed by the NBA and implemented by the SEED Project. The coaches trained through the program will then implement the basketball curriculum locally. It also includes a mentorship component that will provide the local coaches with a broad support network through the program. The pilot program is designed to be expanded by USAID and the NBA to other countries across the continent.

The NBA has a long history in Africa with over 30 players from the continent having featured on NBA rosters since Hakeem Olajuwon was drafted in 1984. Through NBA Cares, 37 places to live, learn or play have been created in Africa, and Basketball without Borders Africa has been held 11 times. The league opened an African headquarters in Johannesburg, South Africa in 2010, and followed with the launch of the Royal Bafokeng Sport Jr. NBA development program in 2011.

USAID has worked in Africa on behalf of the American People for more than 50 years and is currently providing assistance to 42 countries across Sub-Saharan Africa. The Agency is focused on ending extreme poverty by removing constraints to growth, promoting food security, transforming public health, increasing opportunities for women and youth, responding to humanitarian emergencies while building resilience to future crises, and promoting low-emissions growth and sustainable development. USAID is boosting agricultural activity through Feed the Future (FtF), strengthening health systems through the Global Health Initiative (GHI), and promoting youth engagement through the Young African Leaders Initiative (YALI).

ABOUT USAID:Â The US Agency for International Development (USAID) is a leading US Government agency responsible for the US foreign development assistance. USAID works in approximately 100 countries around the world delivering humanitarian assistance, supporting social sector improvements, and facilitating economic development.

ABOUT THE NBA:Â The NBA is a global sports and media business built around three professional sports leagues: the National Basketball Association, the Womenâ€™s National Basketball Association, and the NBA Development League. The league has established a major international presence with games and programming in 215 countries and territories in 47 languages and NBA merchandise for sale in more than 125Â 000 stores in 100 countries on 6 continents. NBA rosters at the start of the 2013-14 season featured a record 92 international players from 39 countries and territories. NBA Digitalâ€™s assets include NBA TV, which is available in 60 million US homes, and NBA.com, which set a record last year with more than 9.5 billion page views, with more than half of all visitors originating from outside of North America. The NBA is the No 1 professional sports league on social media, with more than 600 million likes and followers globally across all league, team, and player platforms. Through NBA Cares, the league and its teams and players have donated more than $230 million to charity, completed more than 2.8 million hours of hands-on community service, and created more than 860 places where kids and families can live, learn, or play.